The Apostles’ Creed is attributed to some of the earliest missionary followers of Jesus Christ, distilling the fundamental basics of what it means to be a Catholic and follow in the teachings of God. The creed acts as a concise summary of His teachings and is deeply rooted in Scripture. By reciting the Apostles’ Creed, we can feel a sense of unity and community with fellow Catholics of every age worldwide.

When we recite the Apostles’ Creed during Mass, we end the creed saying “Amen,” our declaration of affirmation and confirmation. We, the assembled faithful of Christ, recite the creed as it is our shared belief. While the creed is not our entire faith, it mentions fundamental truths we believe and surmises the teachings within the Scripture.

Although the Apostles’ Creed was written centuries ago, it still plays an important role in the Catholic Church, allowing us to reflect on the words and praise the glory of God.

What Is the Catholic Apostles’ Creed?

The word “creed” comes from the Latin word “credo,” which means to believe or a commitment to and profession of faith. The Catechism of the Catholic Church defines a creed as a symbol of faith. The Apostles’ Creed is one of the Prayers of the Rosary and gets its name because it is considered a summary of each apostle’s faith.

The Apostles’ Creed is also known as “Apostolicum,” a profession of faith used in the Catholic Church. Previously, the Apostles’ Creed was said to be composed by the 12 Apostles. Now, the creed is thought to have been developed from initial interrogations of catechumens, people receiving instructions to be baptized.

Who Wrote the Apostles’ Creed?

The Apostles’ Creed was created in response to heresy, defending the Christian faith and Gospel. The creed was to help articulate the foundational aspects of the Catholic faith against heresy, specifically Gnosticism, which denied Christ’s incarnation, divine creation, salvation by faith in Christ and the deity of Christ. The articles of the Apostles’ Creed were effective tools to profess faith and defend the Catholic faith in the face of heresy.

What Is the Meaning of the Apostles’ Creed for Catholics?

The early Catholic Church was designed to spread the glory of God and the apostolic faith that was shared with humanity from Jesus’s teachings and His disciples. The Catholic Church uses Gospel stories and brief formulas, which were largely intended for baptism. Baptismal candidates could memorize these formulas and practice their teachings. As the Catholic Church spread throughout the world, gaining many new followers, it required a common language to express the church’s beliefs.

The Apostles’ Creed was one aspect of a common language, allowing unification between Catholics worldwide and ensuring all Catholics shared the same beliefs. At its core, the Apostles’ Creed is a profession of faith in God and His teachings, and it includes articles about each of the three persons of the Holy Trinity. The Apostles’ Creed serves as a concise summary of Catholics’ beliefs and the core aspects of the Scripture and God’s teachings.

Looking at each article of the Apostles’ Creed can help you understand the importance of the creed.

Article 1: I Believe in God, the Father Almighty, Creator of Heaven and Earth.

Article 2: And in Jesus Christ, His Only Son, Our Lord.

The second article reaffirms that Jesus is God’s son and that he is divine. The term “Lord” itself implies divinity as it is ascribed to God, so using the word “Lord” in reference to Jesus Christ directly relates the Son to divinity. Jesus’s name comes from Hebrew and translates to “God saves,” meaning that Jesus is our savior.

Article 3: Who Was Conceived by the Power of the Holy Spirit and Born of the Virgin Mary.

Article 4: He Suffered Under Pontius Pilate, Was Crucified, Died and Was Buried.

Jesus Christ was both divine and human, meaning he felt pain and could die, which he did on Good Friday. Under Pontius Pilate, Christ was crucified and died for our sins.

Article 5: He Descended Into Hell. The Third Day He Arose Again From the Dead.

Jesus did not descend into the Hell of the damned where Satan resides. Instead, “hell” was a term used by early Catholics to describe the place of the dead. While Jesus died and went to the place of the dead, this states that on the third day, he rose again, coming back from the dead due to his divine power. Jesus Christ returned from the dead in a risen and glorified body.

Article 6: He Ascended Into Heaven and Is Seated at the Right Hand of God the Father Almighty. 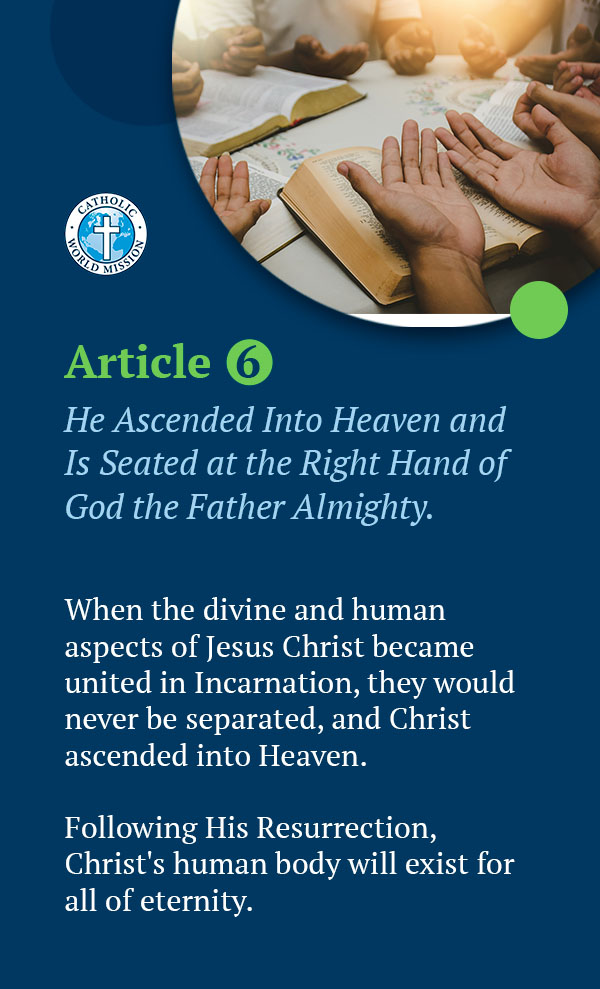 When the divine and human aspects of Jesus Christ became united in Incarnation, they would never be separated, and Christ ascended into Heaven. Following His Resurrection, Christ’s human body will exist for all of eternity. Believers of the Catholic faith hope to join Jesus Christ in Heaven one day, where he resides with His body and soul.

Article 7: He Will Come Again to Judge the Living and the Dead.

In the Catholic faith, we believe that there is an immediate judgment of a person upon their death to determine if they will ascend into Heaven based on their life. There is also a general judgment of all of God’s children during the Second Coming.

Article 8: I Believe in the Holy Spirit.

The eighth article reminds us all that God is a triune God, meaning he exists in three persons known as the Holy Trinity, consisting of God the Father, the Son and the Holy Spirit. Each of these persons is distinct but equal in divinity to one another.

Article 9: The Holy Catholic Church, the Communion of Saints.

Catholics believe that the Church is an essential aspect of our lives and a way for us to celebrate the glory of God. Catholic churches are divine spaces where we may come together to learn the work of God and spread His message.

Article 10: The Forgiveness of Sins.

Jesus Christ came to the world and gave his life for our sins. The forgiveness of sins is a fundamental belief of all Catholics. We are imperfect beings who will sin throughout our lives, but God still loves us and grants us forgiveness through baptism, confession and the Sacrament of Penance. God teaches us that, despite our sins, we can seek forgiveness and lead a life in His light.

Article 11: The Resurrection of the Body.

Article 12: And in Life Everlasting.

As Jesus Christ, our Lord and Savior died, so must humans, as we are only mortals. As Jesus rose again, so shall humans thanks to the Glory of God. Death is how we cross from our human life into the next. When we die, immediate private judgment occurs, and Christ judges our soul to determine if we are particularly virtuous. Even if we have sinned, if we profess our faith, seek forgiveness and live a virtuous life, God will allow us to ascend into Heaven.

The wicked, evil or damned souls who die in mortal sin will suffer an eternity in Hell. Catholics also believe that there is a middle ground for souls who were not virtuous enough to ascend into Heaven but were not wicked enough to go to Hell. These souls go to Purgatory, a place between Heaven and Earth where departed souls go to be cleansed of sins before ascending into Heaven.

What Is the Difference Between the Apostles’ Creed, Nicene Creed and Athanasian Creed?

Creeds are an essential aspect of the Catholic faith and help us profess our faith and beliefs. Creeds are also incredibly important in correcting errors and various forms of heresy. A Catholic creed also helps to provide standards for God’s children.

There are three main creeds in the Catholic Church, including the Apostles’ Creed, Nicene Creed and Athanasian Creed. Each creed is unique and used for different purposes. Understanding the difference between these creeds can help you determine their unique aspects and when to use each creed for self-reflection and prayer.

The Apostles’ Creed is the oldest and shortest creed and is generally one of the most well-known and commonly used creeds. Throughout history, Christians have written many declarative professions of faith. The Apostles’ Creed is one of the first of these professions, which identifies and reiterates some of the most fundamental aspects of Christian doctrine.

The Catholic Church requires a clear and concise summary of its faith and beliefs, allowing for the spread of authentic Catholic beliefs throughout the world. Creeds help define the truth, which can set us free from corruption and sin. God’s truth delivers us to eternal hope and a life living in His glory and splendor.

The Nicene Creed results from two ecumenical councils, with one in Nicaea in 325 and the other in Constantinople in 381. The councils were held as a response to heresy, specifically Arianism. In 318, a presbyter known as Arius committed heresy by claiming Jesus was not God but a celestial servant. The Nicene Creed corrected this instance of blasphemy and explained the nature of God — the Father, Son and Holy Spirit.

In addition to correcting Arianism, the Athanasian Creed also addresses other heresies, including Monophysitism and Nestorianism. The heresy of Monophysitism falsely asserts Christ has only one nature instead of two natures, including divine and human. On the other hand, Nestorianism attempts to deny the reality of Incarnation, representing Jesus Christ as not a God-made man but a God-inspired man.

When Should We Recite the Apostles’ Creed?

In many cases, the Apostles’ Creed is used for baptismal events and the Holy Communion. The Apostles’ Creed brings us all together within the eyes of God and binds us together. This profession of faith unites us as believers of all ages and walks of life.

Why Is the Apostles’ Creed Important Today?

The Apostles’ Creed remains an important aspect of the Catholic faith and helps us remember what we truly believe in. Teaching the Apostles’ Creed is also incredibly helpful to children and adults new to the faith, helping them learn the fundamentals of the Catholic Church. Evangelizing with these professions of faith helps spread God’s word for those new to the Church.

Additionally, the Apostles’ Creed is an essential tool for missionaries looking to provide a clear yet concise statement of what the Catholic Church believes when spreading the Gospel and helping those materially and spiritually less fortunate. The Apostles’ Creed also acts as a profession of faith.

Some of the reasons the Apostles’ Creed remains important today include:

Catholic World Mission is founded on four pillars, dignified living, evangelization, education and disaster relief. Our goal is to empower people throughout the world and share God’s truth. We are the hands and feet of God, helping those materially and spiritually less fortunate receive the tools they need to live a prosperous life. We share the Glory of God, spreading His teachings and Gospel. When we share the word of God, we help others to understand their God-given potential.

Send us your prayer intentions and help us spread the word of God by donating to Catholic World Mission today.

Deacon Rick Medina is the Executive Director of Catholic World Mission and oversees the management of all of Catholic World Mission's projects in over 35 countries. He was ordained a deacon of the archdiocese of Atlanta in 2013. He currently serves at All Saints Catholic Church in Dunwoody, Georgia, and is active in several ministries, including RCIA, baptism preparation, Life Teen, Altar Server group, Grief Share, and Adult Faith Formation.